The Patient Who Changed Me

The Patient Who Changed Me

Shepherd Center employees talk about the bonds they form with patients and their families.

People who work at Shepherd Center say it again and again. Every patient has a story – a traumatic story, a survival story, a redemption story.

Yet while Shepherd Center has a national reputation for the profound effect it has on the people who come through its doors, those same patients and clients often have a lasting, even life-changing impact on the doctors, nurses, therapists, case managers and others who work with them.

“I’ve gotten something from every patient I’ve ever worked with,” says Jeremy Bingham, RN, of the hundreds of patients he’s worked with in the past 17 years as a nurse in the hospital’s Spinal Cord Injury (SCI) Rehabilitation Program.

Here are some of the many stories of how patients and clients have made a difference in the lives of the people who work throughout Shepherd Center – and how they make Shepherd Center a better place. 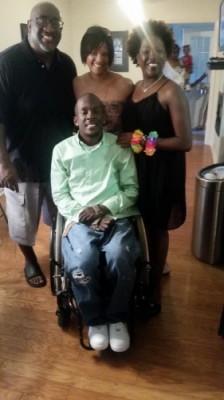 Recreational therapist Shannon Ali, CTRS, had worked at Shepherd Center for about a year when an 18-year-old college freshman from Tennessee transferred from the inpatient Spinal Cord Injury Rehabilitation Program to the SCI Day Program team designated for adolescents.

“Those times when I think to myself, ‘Am I even making a difference? Is this really benefiting them?’ I think of those stories with Fletcher,” Ali says.

Fletcher Cleaves was a scholarship football player when he was paralyzed from the chest down after a car crash caused by a distracted driver. Believing the injury and subsequent disability would forever diminish his life, Fletcher resisted recreational therapy because he thought it was useless.

When Ali escorted him to a restaurant, he paused in his wheelchair for someone to open the door – until Ali insisted he do it himself. When she coaxed him into a store, he said someone else would always have to shop for him – until Ali convinced him otherwise. He reluctantly went to Atlanta’s airport to learn to navigate security and boarding, through a Shepherd Center program sponsored by Delta Air Lines, saying he’d never travel by plane.

Now 28 and a college graduate, Fletcher lives in Memphis, Tennessee, on his own, where he drives, works in IT and is a motivational speaker.

He has also traveled to five continents, trekking up the Eiffel Tower and riding a personal watercraft in Barbados.

“A therapist can make or break a patient at a critical time,” Fletcher says. “They’re going to get you to live your life. That’s the mentality Ali had. Who knows where I’d be if she didn’t?”

Ali, mother of a 12-year-old daughter, still talks regularly with Fletcher and says Fletcher’s influenced Ali as a therapist. Things he’s learned, he passes on to Ali. She incorporates what he tells her about his post-crash life into sessions with current patients. He is also someone her daughter admires.

Fletcher and other former patients send Ali photos or videos of themselves back at home opening doors, skirting sidewalk obstacles, shopping. It’s their way of saying thanks.

Those melt my heart,” Ali says. “They’re real life.” And to Ali, they are also reminder to keep pushing. “I’m part of making a difference.”

Persevering Through Pain to Professor: Shari McDowell and Scott Renner 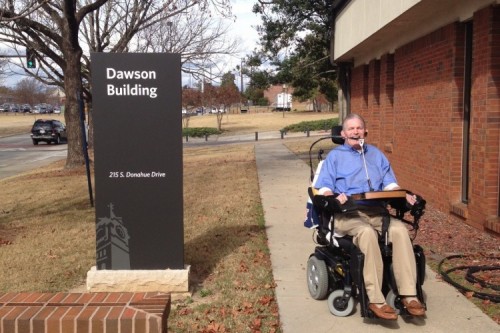 Not long after she began, a 28-year-old patient named Scott Renner arrived. He had sustained a C-3 to -4 spinal cord injury in a diving accident.

“He came in using a ventilator and couldn’t move anything,” McDowell says. “He struggled with severe spasticity to the point that it was terribly difficult to breathe and wean off the ventilator in the early days.”

Despite his pain and many challenges, it soon became clear that Scott was someone special.

“He was one of those guys who wasn’t going to say, ‘No, I can’t do something,’” McDowell recalls.

“Each patient has a different impact. With Scott, it was his perseverance through the pain every day. He shared that with me, allowed me to experience that. He taught me patience. He made me a better listener. He taught me to have more empathy for what people are going through.”

McDowell adds, “He shared everything he knew with somebody else to benefit them.”

Scott continued to have a profound effect on others after leaving Shepherd Center in 1993.

Scott also earned a master’s degree in social work and a doctorate in special education and rehabilitation. He became an assistant research professor at Auburn University, and he collaborated with departments that designed and developed affordable assistive technology while working as the assistant director of accessible electronic and information technology.

“He just fought so hard and was successful,” McDowell says. “It’s such a privilege being part of these people’s journeys. That’s why we do it. Each one of them teaches you something different.”

Harnessing the Power of Positivity: Shannon Stroppel and Luke Putney 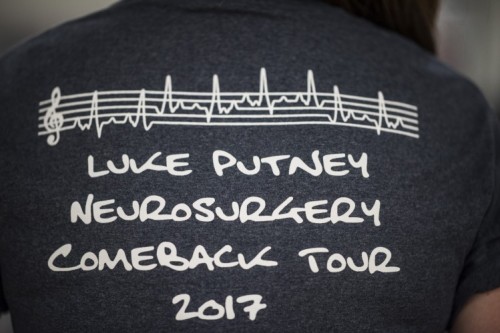 “I told her my life would be different from that day on,” Stroppel says. “And it was.”

Luke was born blind in one eye, and at age 12, he began losing sight in the other. He had brain surgery for an aneurysm compressing on an optic nerve and was completely blind by 16.

Yet Luke remained a top student, musician and wrestler in high school, while also raising money to distribute musical instruments to children recovering in hospitals.

When he returned with a massive headache, doctors discovered a brain tumor. Shortly after surgery, he had a stroke. Following 48 days at Vanderbilt University Medical Center, he transferred to Shepherd Center’s Acquired Brain Injury Rehabilitation Program.

Luke arrived in excruciating pain. Yet he was resolutely uncomplaining. His rehabilitation goal was to return to his charity work.

“I don’t hold everyone to the Luke Putney bar – that is so high,” Stroppel says. “He’s such a powerful, humble, beautiful soul.”

While everyone’s healing journey is unique, Stroppel says she does think of Luke whenever she encounters patients in severe pain.

“It gives me hope that, though they may not see it, the end is in sight here,” she says. “It can get better. Don’t give up.”

Her experience with Luke and his mother, Nancy Hoddinott, has also altered the way Stroppel, 46, approaches daily stresses in her own life.

“I look at life differently as a parent and as a human being,” she says. “I know the power of keeping your mind in a positive state, like Luke and his mother did. I never sweat small stuff. At all.” 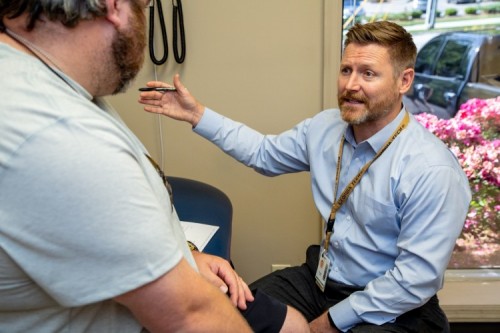 His patients sustained their injuries while serving, following September 11, 2001. Their injuries are mild to moderate brain injury and/or concussions with co-occurring psychological or behavioral health concerns, including post-traumatic stress (PTS).

“Most are super fit and look like they could command a room,” says Dr. Gore, who is also director of vestibular neurology and the Complex Concussion Clinic at Shepherd Center. “But they have deficits and injuries they’re struggling with day to day. That juxtaposition makes it difficult to get treatment. It’s even hard to have family members appreciate what they’re dealing with.”

That point was brought home most profoundly by a patient Dr. Gore met in 2016.

Chris Johnson was a 38-year-old Army veteran from Loganville, Georgia. He’d sustained a traumatic brain injury and had PTS from a roadside bomb detonation during his second tour of duty in Afghanistan.

When Chris started a 12-week program at SHARE, Dr. Gore asked for his rehabilitation goals. Chris’ reply was heartbreakingly simple: He wanted to be able to have lunch at school with his daughter and her third grade class.

“I had a daughter the same age,” Dr. Gore says, “and the idea that somebody was so impaired that he avoided interacting with his child – couldn’t be in an elementary school environment without experiencing symptoms of PTS – really resonated with me.”

Eight weeks into the program, Chris returned home for a week. He had lunch at school with his daughter.

“When he came back, he was like a kid in a candy store. He was so excited to have been able to do that,” says Dr. Gore, who served eight years as an Air Force flight surgeon, deployed in Afghanistan and Iraq.

“He showed up and said, ‘Now I have to set a new goal!’” “That story really resonates in terms of what we do at SHARE,” Dr. Gore adds, “and the importance of trying to reintegrate folks into the community in meaningful ways.”

Dr. Gore says working with SHARE clients like Chris has been therapeutic for him in dealing with the effects from his own service experience.

“It’s changed me,” he says. “It’s made me more self-aware about how I interact with my own children and family. I’ve taken care of people who survived battles I was involved in.” 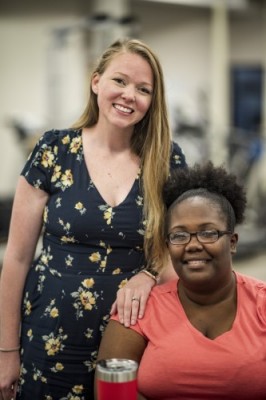 Lorelei Benham, MS-SLP, often sees patients who, she says, “see multiple sclerosis as a death sentence. They feel like the odds are stacked against them. And that’s just not the case.”

So when Benham, a speech language pathologist, sees JoTandria Brown-Leary walk each week through the doors of the Eula C. and Andrew C. Carlos Multiple Sclerosis (MS) Rehabilitation and Wellness Program, she instantly brightens.

Like many patients in the Wellness Program, JoTandria, 34, arrives with challenges beyond her relapsing-re-mitting MS. She’s also working to heal from her depression, anxiety and post-traumatic stress (PTS), all while raising a family as a single mom.

“But she still shows up every week with a smile on her face,” says Benham, who began working fulltime at Shepherd Center five years ago. “Every time I see her, I try to brighten her day. She sure brightens ours. It gives me more drive.”

Benham says her relationship with JoTandria makes her feel she’s in the right career and providing people with the care they deserve.

“All of us here are doing this job because we want to help people. And the work we do must be meaningful because she shows up every day. She feels this is a safe place for her to come.”

JoTandria says she views Benham “more like family now – like the sister I never had. I’m not the type that’s easy to open up, but she makes it easy.”

Benham’s bond with JoTandria helps her as a clinician and person, as well, by keeping her grounded.

“It puts life in perspective,” Benham says. “It reminds me to give back to others and keep my family as humble as possible without letting problems get in the way.”