Family and friends remember Harold as kind and generous.

James Harold Shepherd, Sr., died peacefully on Monday, December 10, at age 90. A fourth generation Atlantan, he was the son of Mabel Plunkett and William Clyde Shepherd. He was the younger of six children, Clyde, Charles, Elizabeth Knox Green, Margaret Yates (Dan) and Dan Shepherd. He was also predeceased by his beloved daughter, Dana.

He lived a long and interesting life. At age 14, his father put a pistol on the seat and told him to drive to Tallulah, Louisiana, and work on a levee they were building. He wanted to be a race car driver, but his father said no. He raced around town and the legendary bootlegger, Legs Law, called him and said he heard of him and would come down and race him. Harold said it was the only race he ever lost.

He soloed at age 15 in a single engine Piper Cub with no radio. He could land on the grass at Atlanta Airport if they gave him a green light; a red light meant go around!

It was once said that no one knew more about an asphalt plant in the state of Georgia than Harold Shepherd. Harold started paving operations in 1949 and managed 15 asphalt plants across Georgia, North Carolina and South Carolina. He holds a patent on the rumble roller, which marks the pavement edge on roads, and helped develop two asphalt terminals, which store liquid asphalt. He built all but one section of I-95 in Georgia.

Construction wasn’t Harold’s only family endeavor. Along with his wife, Alana Shepherd, their son, James, and David F. Apple, Jr., M.D., Harold founded Shepherd Center in 1975. The idea for the Center formed after James sustained a spinal cord injury in a bodysurfing accident in 1973. For James’ initial recovery, the family had to seek treatment far from Atlanta because there was a lack of rehabilitation care options in the Southeast. Frustrated, but determined, the Shepherds devoted themselves to creating a rehabilitation center for people with spinal cord injuries closer to home and to help others in the region. Harold’s work in the business world proved to be quite instrumental in Shepherd Center’s launch.

His friendship with legendary real estate developer Scott Hudgens enabled the hospital to acquire the five acres on Peachtree Road for $800,000.

“His family and business connections played a huge role in starting Shepherd Center and in saving my dad’s life,” says Jamie Shepherd, Harold’s grandson and son of James. “Without those connections and his relationships, Shepherd Center might not be here.”

Remembered as a natural storyteller and somewhat of an unofficial Shepherd Center historian, Harold was a founding board member at Shepherd Center and still came to Shepherd almost every day before his passing.

“I have known Harold since 1984, and he is a man that I have such respect for,” says Sarah Morrison, PT, MBA, MHA, president and CEO of Shepherd Center. “He truly was one of the best storytellers I know – detailed stories that were peppered with humor. He was also one of the nicest men I know. He would always come into my office and ask what he could do for the staff. He wanted to make sure that all his efforts and donations were going to make an impact on the staff. He continually recognized the great work the staff does on a daily basis.”

For all his accomplishments, he considered building Shepherd Center with his family to be his finest.

“He wanted to be here, talk to people, to be around the hospital and watch as it grew,” says Julie Shepherd, Harold’s granddaughter, who is a case manager at Shepherd Center. “He often talked about how proud he was of Shepherd Center. His construction career had been rewarding in one way, but he was even prouder of what they’d done here (at the hospital) and the lives they’d changed.”

“He was such a kind and generous man who always gave everyone else credit for the success of Shepherd Center,” Sara Chapman says. “He cared so deeply about sharing the passion he had for Shepherd Center, and he always had a great story to tell. I will always remember him at Derby Day, which he absolutely loved – and when the Paralympics were in Atlanta, how proud he was to lift that torch and bring hope to this community. I will miss him terribly.”

Just before Harold’s 90th birthday in 2018, the Georgia General Assembly unanimously approved a resolution to designate a section of Peachtree Road in Buckhead in his honor. In July, the portion of Peachtree Road from Peachtree Battle Avenue to Brookwood Station – the very same slice of road that is home to Shepherd Center – was honorarily designated J. Harold Shepherd Parkway.

Harold was recognized with several awards for service and dedication – including the American Academy of Physical Medicine and Rehabilitation’s Distinguished Public Service Award, the American College of Physicians’ Edward R. Loveland Memorial Award for a Distinguished Contribution in the Health Field, Atlanta Business Chronicle’s Healthcare Heroes Award, Outstanding Service to Georgia’s Handicapped Citizens Award, Hagar & Jay’s Award from Delta Air Lines for servant leadership, the Tiffany Blue Angel Award and the Christopher Reeve Spirit of Courage Award. He also received an honorary doctorate of laws from the University of Georgia in 2011. But, you never heard Harold boast.

Though what started as a six-bed rehabilitation unit is now a world-renowned, 152-bed research and rehabilitation facility spread across three campuses, Harold’s family members say his greatest influence has been on the feeling people get while at Shepherd Center.

A memorial service will be held at 2:30 p.m. Thursday, December 13, at Peachtree Presbyterian Church, 3434 Roswell Rd NW, Atlanta, GA 30305 with a reception following in Fellowship Hall. In lieu of flowers, a gift to Shepherd Center Foundation, 2020 Peachtree Road, Atlanta, Georgia, 30309, would make his heart sing. You may give online at shepherd.org/give. 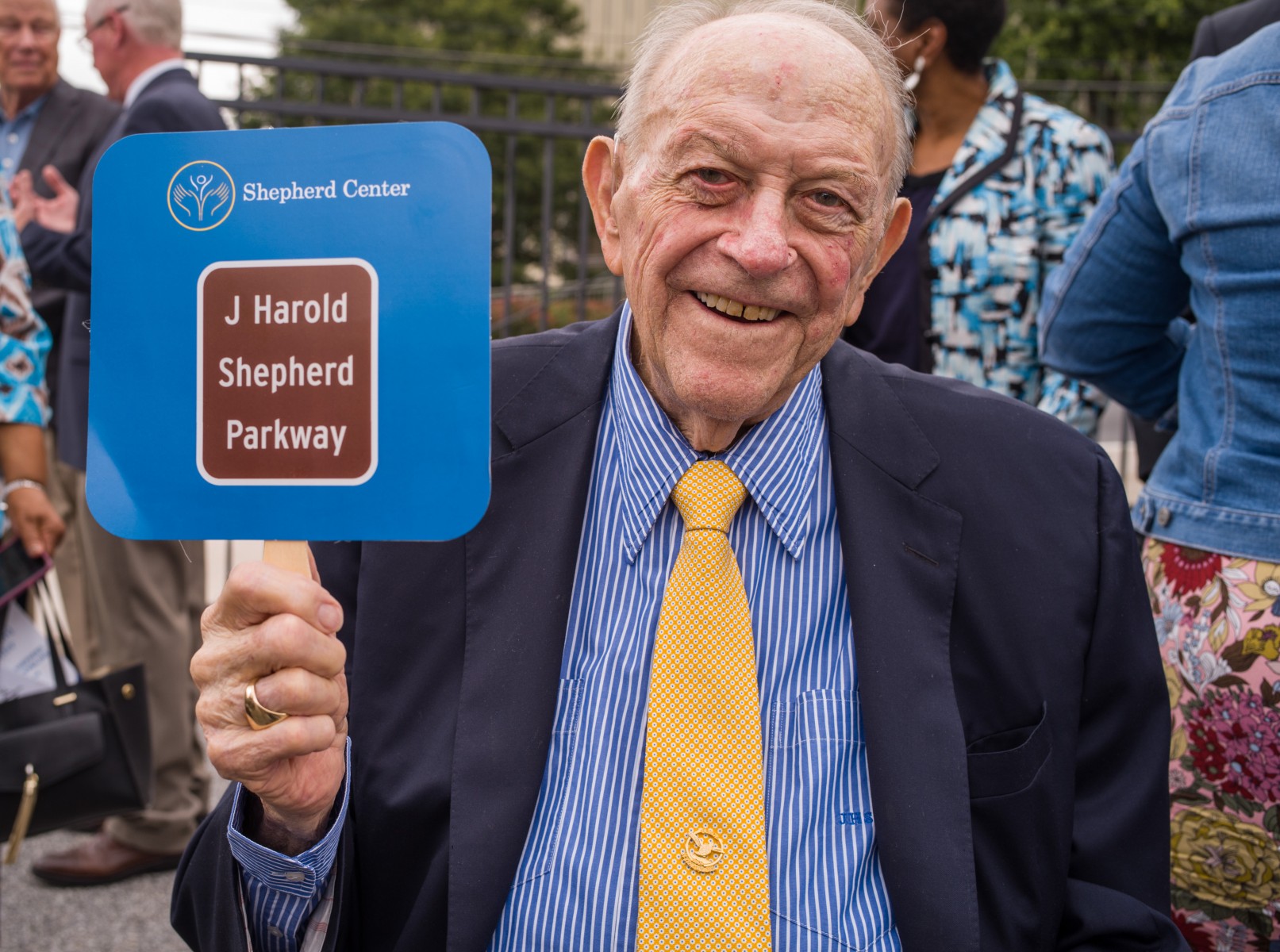