Tips on how to approach dating and relationships after injury from people who have lived it.

As humans, we have the innate desire to relate with others and to form fulfilling connections. Relationships take effort, but they also can ultimately lead to something deep and meaningful. Recently, we spoke with a few people who have conquered their own obstacles to find romance after injury. 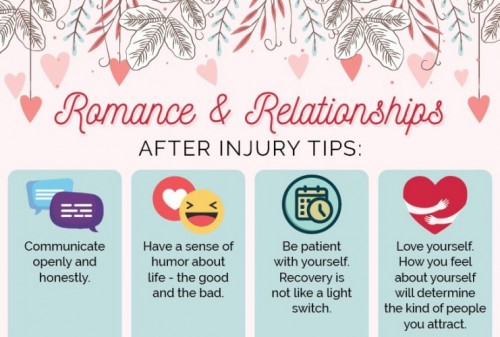 Zac Bradley exudes confidence. His positivity and enthusiasm for life are apparent from the moment you meet him. Seeing him now, you would not guess that he ever struggled with his identity or self-esteem. Yet, in the summer of 2011 after his freshman year of college, he sustained a spinal cord injury (SCI) when a tree fell onto his car. He worried that his identity as an athlete and as a desirable young man would disappear only to discover, after a lot of self-reflection, that neither was the case.

David and Brittany Carter met four years after David sustained a T-7 injury in a motorcycle crash in August 2010. He had been looking for someone who could see past his wheelchair for who he really was, and he found that in Brittany. The couple has been married for nearly two years and have been a couple for nearly six. Not letting events of the past define them accentuates their deep love and respect.

Both of these stories highlight people who have dealt with trauma before reclaiming their identities and taking on dating and relationships with confidence, open minds and open hearts.

This Valentine’s Day, regardless of whether you are single and looking, seeing someone new or in a long-term relationship, we hope that you learn a few lessons in love from their accounts.

How did you meet?

David: We met at Shepherd Center’s Adventure Skills Workshop (ASW) in May of 2014. I was at the water ski site when I saw Brittany walking down the hill toward me. She was studying recreational therapy at the University of South Alabama at the time and was also volunteering at ASW that weekend.

Brittany: When I saw David, I immediately thought he was attractive. That moment when we met at the bottom of the hill was the only time I talked to him that weekend, but afterwards, I couldn’t stop thinking about him! Eventually, I reached out to him on Facebook and we officially started dating in September.

David: It is really difficult to meet somebody when you’ve had a catastrophic injury who sees past your injury. She looked through that, and it drew me to her. She saw me for who I was at the time – not for the wheelchair.

Brittany: I loved his zest for life and how easygoing he was. He didn’t let anything hold him back regardless of his injury. I’d never seen anybody like that before.

David, what new challenges did you face post-injury?

A lot of people judge you based on what they can see instead of who someone truly is. There were a couple of people I tried to date who never called me back or who lied to me about why they didn’t want to date me. I finally met Brittany four years after my injury. She is open to trying anything and going anywhere.

How do you overcome challenges in your relationship?

Brittany: David uses humor as a way of coping with certain situations and difficult topics. He laughs at himself and I sometimes laugh with him. As a couple, you need to find different ways of coping – whether it’s humor or having a serious conversation. Either way, communication is key.

When we first started dating, David actually opened up and told me that if we continued our relationship, there would be challenges we would face due to his injury. He told me to feel free to ask him any questions about it, and that he’d be totally open and honest with me. It opened the door for me to be comfortable asking him questions.

David: Yes, communication is big. When you make a serious connection with someone, you need to be willing to talk about anything – the good, the bad and the ugly. Trust is also important. Brittany and I had a long-distance relationship for a while, and we trusted each other the entire time to stay faithful. When it comes down to it, we are here for each other.

How did you get engaged?

Brittany: After we met at ASW, we started going each year to volunteer. The third year of volunteering together, David surprised me on the dock where we first met and popped the question. We got married in 2018 and will celebrate our two-year wedding anniversary on March 24.

If you could talk to someone who was recently injured and is in a dark place right now, what would you say to them about finding a committed relationship?

David: when I was going through the Spinal Cord Injury Day Program at Shepherd Center, peer support manager Pete Anziano told me something that sticks out to me to this day 10 years later. He said, “Your obstacles and limitations will be what you put in front of you.” If someone asks you to do something and you say no because you don’t think you can do it, then it definitely won’t happen. If you say yes, it gives you an opportunity to excel and achieve. A few doors closed due to the accident, but others open if you are willing to try things. I’ve tried things now that I never would have tried pre-injury.

Brittany: The situation you are going through right now is not permanent. It does get better. How you choose to move forward and change your mindset is what really counts. What people should understand is that we’re all flawed. Nobody is perfect. When you learn to love yourself regardless of what has happened to you, you’ll attract people that are worthy of your love who will see you for who you are and not for what you have been through in the past.

How were you injured?

I received a basketball scholarship to attend Clayton State University. After playing one season of basketball, I was injured when a tree fell onto my car after freshman year in 2011.

What challenges did you face post-injury?

My confidence took a big hit after my injury. Prior to injury, I was athletic and confident. After injury, I lost my identity as an athlete. I felt like people were looking at me for my wheelchair and not for me. I wanted someone to see me and not as somebody they have to take care of. I’d say I spent about two years without the confidence to date anybody.

How did you overcome that?

I went back to focusing on what would make me feel like myself again. First, I focused on my education and graduating on time with my peers. I received my bachelor’s degree in health and fitness management in four years from Clayton State University and was even the commencement speaker at my graduation. After that, I decided to go to graduate school. I received my master’s degree in rehabilitation counseling from Georgia State in 2017. Since then, I’ve worked at the Shepherd Center as a peer liaison and vocational specialist, and then worked at the Georgia Advocacy Office as an employment advocate. I now work for Shepherd Center’s SHARE Military Initiative as a vocational specialist part-time and as an employment specialist for another organization that assists people with disabilities with gaining employment.

I also wanted to reclaim my identity as an athlete, so I joined the wheelchair rugby team at Shepherd. That filled the athletic void for me. The guys on the rugby team had all been injured longer than me and taught me how I could be more independent post-injury.

Has reclaiming your identity helped your dating life?

Yes. I’ve actually found that if I go to bars with my friends, I am more likely to get hit on than them! I’ve tried online dating and was totally open about my chair on my profile. I want people to know who I am. The good thing about using a wheelchair is that it puts the people in your life who truly want to be there and prevents superficial relationships.

What would you say to someone who may be having confidence issues now?

First, figure out what’s missing. What is it that is taking away from your confidence? Whether it’s the type of job you want or a hobby you identified with or anything else, find out your options to get back to it so you can build that sense of self-esteem. For me, it was going back to school and doing rugby.

Once you do start dating someone, communication is important. I’m dating someone now and we have been open and honest with each other from the beginning. We don’t tiptoe around talking about my injury or talking about our insecurities – we address them.

Getting your confidence back will not be like turning on a light switch. Give yourself time and patience. Lean into the people who love and support you. And, remember to have a sense of humor about life – even the hard parts.