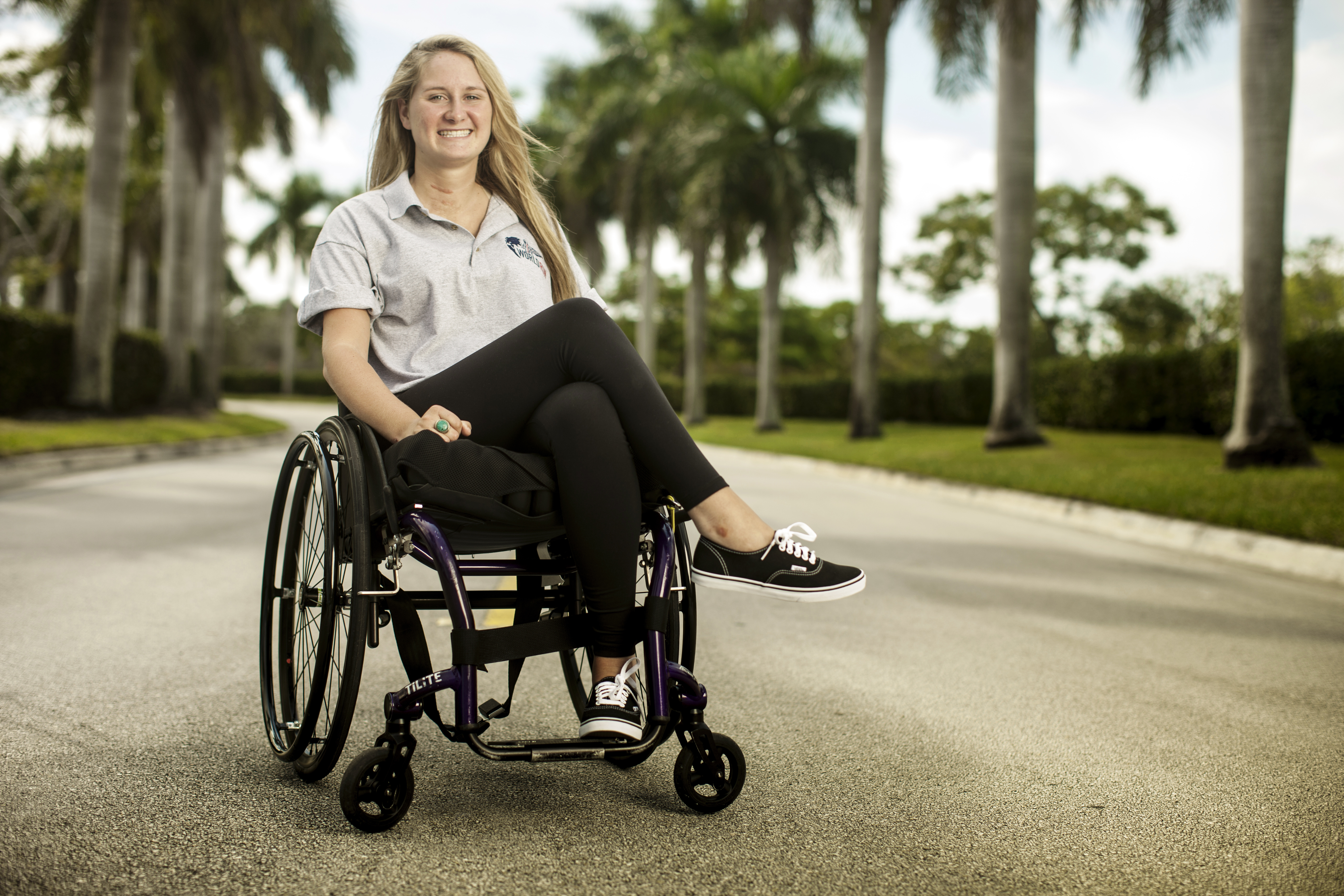 Brooke Thabit
Eighteen-year-old Brooke Thabit, of Boca Raton, Fla., serves as the official race ambassador of the “Wings for Life World Run." The race, sponsor Red Bull, is being held on Sun, May 4, and 100 percent of the proceeds go to Wings for Life, a spinal cord injury research foundation dedicated to finding a cure.

On Sunday, May 4, 18-year-old Brooke Thabit, of Boca Raton, Fla., will be up a little earlier than usual. That’s partially because she will be competing in the wheelchair division of “Wings for Life World Run,” which begins at 4 a.m.

But Brooke will be much more than a competitor that day. She is also the official race ambassador, so Brooke will be giving news media interviews, as well, to explain how the race will support research to find a cure for spinal cord injury.

“This race is happening with thousands of runners taking part in runs all over the world, all at the same time,” she said. “It sounded like a great opportunity to raise awareness, and it’s been a lot of fun to be a part of this.”

Growing up less than a mile from the beach, Brooke took to the water at an early age – fishing, swimming, diving, anything that involved the ocean. She had even become a competitive surfer, sponsored by Ohana Surf Shop in Stuart, Fla.

On Labor Day of 2012, Brooke was hanging out with friends by the water. She dove off a dock without realizing that the surf below was only knee-deep. Brooke hit the bottom and sustained a spinal cord injury.

She spent four months in rehabilitation at Shepherd Center. “I was able to accomplish so much there,” Brooke said. “I learned to sit up, brush my teeth, eat, just learned to be as independent as possible. I got a lot stronger at Shepherd.”

She still does physical therapy five days a week, for three hours a day, back in Florida. For her 18th birthday last year, Brooke went skydiving. Thanks to her surfing connections, she has also gotten back out on the water. Brooke even spent a day on a modified WaveJet longboard with Cory Lopez, a professional free surfer.

“She still has that same wonderful, giving attitude that we’ve known since the day we first met her five years ago,” said Tara Schwartz, who, along with her husband Jordan, owns Ohana Surf Shop. “She’s taught me so much with how she’s used her grace and strength in dealing with everything that’s come her way. You see it with this race. She has such a big heart.”

Tara and Jordan will be among many members of Team Brooke competing in the May 4 “Wings for Life World Run,” which will take place simultaneously across four continents and in more than 40 locations. Among the expected 5,000 runners to participate in the Florida race are fellow patients and Shepherd Center staff members Patty Antcliff, an occupational therapist, and Cathi Dugger, a physical therapist.

“We partnered alongside Brooke through her rehabilitation and journey to independence at Shepherd Center by pushing her to the limits,” Antcliff said. “Even then, Brooke was already making a difference to those patients around her with her joy for life. It is no surprise to us that she’s continuing to make a difference in the lives of those in similar situations by searching for a cure.”

The race itself has a unique wrinkle. “There’s no finish line in this run,” Brooke explained, “because there’s no cure yet for spinal cord injury.” A “chaser” car will follow 30 minutes after runners take off. When it passes each runner, their race is over.

Thanks to event sponsor Red Bull, 100 percent of the race’s proceeds go to Wings for Life, a spinal cord injury research foundation dedicated to finding a cure. In her role as ambassador, Brooke has already spoken to the news media and promoted the race to running clubs across Florida.

“This race, and this research, gives me and a lot of other people like me, a lot of hope,” she said. “The most important thing for me right now would be to stay as active and as healthy as possible so that when they do find a cure, I’m healthy enough to walk again.”

To learn more about the race and the Wings for Life Foundation, visit www.wingsforlifeworldrun.com/en. For more about Brooke, visit the Team Brooke website at www.brookethabit.com.