“Three Quad Amigos” encourage each other through life’s challenges and changes.

On a sunny afternoon in May, Suzanne Nugent Zimmer, Madge Pentecost Williams and James “Jimbo” Boyd gathered on the patio of a suburban Atlanta restaurant to celebrate peer support relationships that began at Shepherd Center 32 years ago.

Fortunately, Madge, who had sustained a complete C-5-6 spinal cord injury four years earlier in an automobile accident, was one of Suzanne’s first visitors at Shepherd Center.

“She was a little older than I was, she had gone back to college and she was driving,” Suzanne recalls. “She had a job and she was in good spirits. That gave me hope.”

A month later, Suzanne was in a physical therapy class when in wheeled Jimbo, “a beaming, whistling, blonde super quad in a manual chair with flashing front casters,” Suzanne wrote in a recent post on Facebook.

Jimbo sustained a C-5 incomplete spinal cord injury in 1974 when he dove into a swimming pool in suburban Detroit. When he met Suzanne, he was in Atlanta to participate in the Wheelchair Division of the AJC Peachtree Road Race.

"I reached out and she reached out," Jimbo says. "There was a mutual feeling of needing and being needed."

Madge and Suzanne lost track of each other for many years when Suzanne worked in marketing and project management for BellSouth in Atlanta and Birmingham, Alabama, but reconnected five years ago. Jimbo and Suzanne never lost touch. Their connection was one reason he moved to Atlanta in 1998 and took a job selling adaptive equipment for people with disabilities.

But Madge and Jimbo didn't know each other, which made the gathering in May of "the three quad amigos," as Suzanne called them, even more special.

“We really hit it off,” says Jimbo, now 58 and retired. “We were the only ones on the patio, and we spent two and a half hours out there.”

“It was great,” says Madge, who is 54 and lives in nearby Marietta, Georgia. “We were talking about how old we were and how amazing it was that combined, we have 110 years of experience in wheelchairs. But it wasn’t just about disabilities. We were three people who had something great in common, who love and support each other. Everyone should have that – people who will be there for you.”

“We talked about life,” says Suzanne, now 49, who lives in suburban Roswell, Georgia, with her husband and daughters, ages 17 and 14, and manages two rental condos in Destin, Florida. “We all have wonderful spouses, and we talked about getting older and medical issues. I had double pneumonia last year; Jimbo had surgery; Madge lost her service dog and broke her legs."

After a career in the software industry, Madge retired a few years ago and went back to school. She works now with a financial planning firm and keeps a busy schedule of outside activities – leading a Bible study group, belonging to a church small group, speaking at schools on behalf of Canine Assistance about disabilities and service dogs, and blogging.

“Staying active was the best thing I did after my injury instead of spending time at home,” she says. “That would have been depressing. The way to keep the focus off the ‘woe is me,’ is to focus on what you can do. That’s maybe the best advice I gave Suzanne.”

Jimbo, 58, was treated and underwent rehabilitation in Detroit. Driven to be independent, he learned to transfer, dress, drive and handle daily activities – largely on his own.

“Quads have to be really smart to adapt and figure things out, and in those days, therapists were just figuring it out, too,” he says. “When I got out of rehab, therapists would ask me to show other quads how to transfer and daily stuff, like getting out of a car."

He took up swimming, wheelchair basketball and marathoning. When he came to Atlanta for the AJC Peachtree Road Race – he completed 29 of them – he stayed with Suzanne's family. After moving to Atlanta, he competed on Shepherd Center sports teams and became a regular at Suzanne's daughters' activities.

Encouragement and support from their families has been important to all three. Jimbo’s mother urged him from the outset to stay active, and he did.

"Our ability to drive adaptive vans has been a key to our independence and mobility," he says.

Suzanne’s mother, Carolyn, took nursing and caregiving classes and learned by what Suzanne calls "immersion in the situation." Her father, Dan, assists with technical problems and both parents take turns accompanying her to appointments. They also bonded with Madge's father and primary care-giver, Joe Pentecost.

“I feel for people who don’t have family support and resources,” Suzanne says. “You can’t go too far without that.” Her husband, Chris, she says, “is amazing. I don’t know anybody else who would stick with it for 22 years.”

Suzanne has had several medical challenges and credits her "spiritual connection" with Madge and Jimbo for pulling her through.

“They always seemed to know when I was having a dark time," she says. "Madge would come to the hospital. Or Jimbo would call, or bring ice cream. They gave me the will to carry on. They picked me up. If you don’t have that direction or hope, there’s nothing to strive for.”

Their newest challenge is aging – Suzanne will be 50 in November – and they are facing it together, too.

“No one ever died of quadriplegia," Jimbo says. "It’s all the other complications – pneumonia or a septic ulcer or cancer. Those are real and knocking on the door, and the older we get, we tend to pat each other on the back to keep each other going.”

"We all have full lives, and are looking forward to new adventures and opportunities," Madge says. "New freedom to travel, new places to volunteer, improved accessibility, influencing the next generation. And peer support would play a great role in this, too, working with newly injured people who need help and hope."

“Peer support works because it gives you the motivation to keep going,” Suzanne says. “You can’t feel sorry for yourself because other people are in your shoes. You can relate to them. You are not alone.” 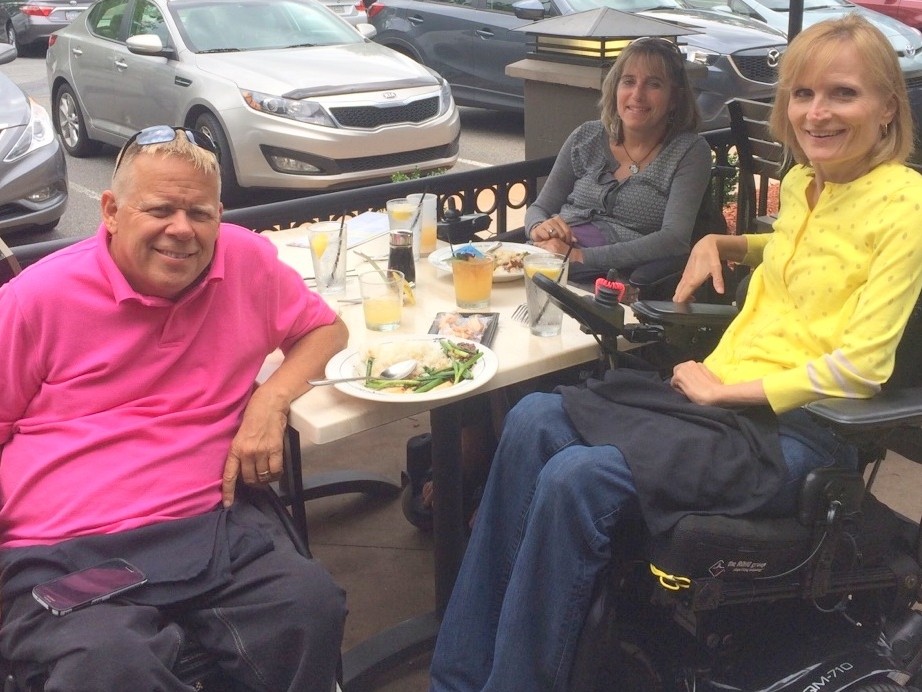