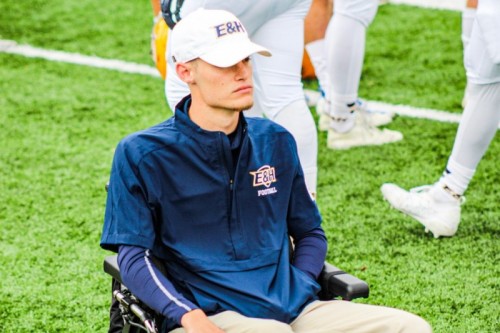 On May 23, 2016, 16-year-old J.T. Brooks, the quarterback for his high school football team, was playing in an inter-squad scrimmage football game when he fell as he tried to avoid a tackle. He landed on his head, sustaining a C-6 – C-7 incomplete spinal cord injury (SCI), which resulted in quadriplegia. After two weeks in Johnson City Medical Center in Tennessee, J.T. was transferred to Shepherd Center.

During his six months at Shepherd, J.T. participated in intensive inpatient and outpatient therapy to relearn how to move his arms, regain finger function, do wheelchair transfers, and feed and dress himself.

“I felt I had a choice to get better, and I was willing to work hard to relearn how to do things in a different way,” he says. “The therapists at Shepherd Center pushed me like a coach would, but they were also very loving. I enjoyed my time there despite the circumstances.”

In January 2017, J.T. returned home to resume the second half of his junior year of high school – and he returned to sports.

“I still wanted to be part of the team and be with my friends, so I just started coaching,” J.T. says.

On the football team, he helped call plays and was active in practices and on the sidelines during the games. During baseball season, J.T. worked with the team calling pitches.

He continued coaching when he went to college at Emory & Henry College in Emory, Virginia, in 2018. As an assistant coach for the football team, J.T. worked closely with the offensive coaching staff, reviewing practice and game films. During his sophomore year, he was the quarterbacks’ coach.

After two years, J.T. decided to leave coaching to focus on his schoolwork. He is majoring in business management and minoring in mass communications and hopes to go into sales when he graduates in spring 2022.

Throughout all his challenges, J.T., now 21, has maintained a positive attitude, never letting his injury get in the way of his plans or his involvement with the sports he loves. He encourages others in his situation to do the same.

“Push your limits,” he advises. “You can do more than you think. Keep a positive attitude, keep active both physically and socially, and rely on your support system.”