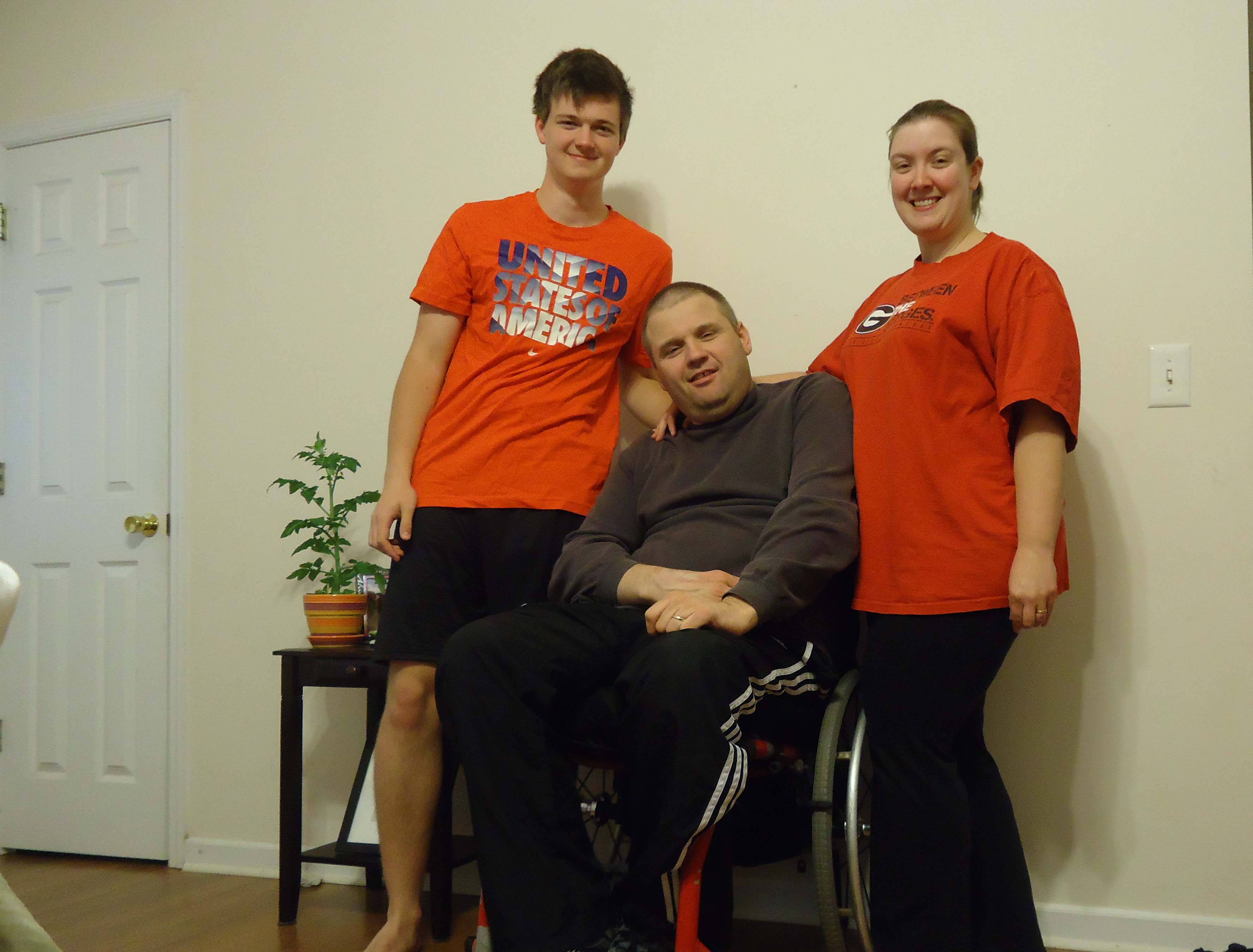 Before Paul Rothe arrived in Covington, Ga., to spend a year with Shawn and Stacy Gaston, he had never been deer hunting. Never been to Waffle House. Never played high school football.

The German exchange student hadn’t spent much time around someone using a wheelchair, either. But neither he nor Shawn Gaston – a former Shepherd Center patient who sustained a spinal cord injury in a 1997 hunting accident – let Shawn’s quadriplegia inhibit their time together.

“I didn’t have any problem introducing him to a lot of stuff that I like to do,” Shawn says.

Paul, 17, says the year lived up to his high expectations.

Paul wasn’t used to seeing as many people using wheelchairs as he encountered in the United States. But he found Shawn’s chair a non-issue, Paul adds.

“It takes two or three minutes to get into the car,” he says. “But that’s something you get used to.”

The success of Paul’s year with the Gastons is especially heart-warming for Donna Ruppert of Sandy Springs, Ga., an international exchange coordinator for EF High School Exchange Year.

Stacy called Donna after first talking with another exchange program, which was making the process more difficult for their family, Stacy says.

“My mother was a quadriplegic, and I have a cousin who’s a quadriplegic,” she says. She describes her cousin as the “inspiration of the family.” In the decades after his diving accident, her cousin built a successful career and family.

“I knew from my cousin that you can be independent and have a good life,” Donna says.

So Stacy and Shawn applied to the program. They read several students’ application letters and decided to invite Paul to Georgia. Donna then sent information about them to Paul and his parents in Leipzig in eastern Germany.

Paul’s family contacted Stacy and Shawn on Facebook and learned more about the Gastons and Shawn’s injury.

“We were pretty straight up. I basically told him that I’m a C-5 to -6 quadriplegic,” Shawn says.

“It didn’t really change my opinion,” Paul says. He had heard glowing stories from friends who had been exchange students in the United States and was eager to see for himself.

And Stacy and Shawn were sure they would enjoy having Paul in their home.

“Shawn and I are unable to have kids,” Stacy says. “So we wanted to experience having a student and also make an impact on someone from a different culture, bring them to America and show them our culture.”

A big part of the culture turned out to be food.

“My biggest adjustment was, you know, teenagers eat a lot,” Stacy says. “I was making almost double, triple, what we normally eat.”

So what did Paul want to eat?

Pizza is first on the list, then Hot Pockets and Chick-fil-A.

Paul also liked Alcovy High School in Covington, Ga. Football in Germany is soccer, but Paul became a kicker for the Alcovy team with the oblong ball.

And he got a good dose of Shawn’s love for the outdoors. In Germany, hunting licenses are prohibitively expensive, Paul says.

“He never got to go hunting, so I took him deer hunting,” Shawn says. Stacy doesn’t hunt, so it was just the two guys out in the woods.

“It was a great experience,” Paul says.

Paul became part of the family routine. Shawn, an information technology worker, often gets home earlier than Stacy, an emergency medical technician. So he and Paul could spend time competing on the Playstation 3 before Stacy arrived.

“It’s going to be weird without him,” Shawn says.

“I know I’ll always have a family and a place to stay here,” he says.

Stacy and Shawn will consider inviting another exchange student. Down the road, they may consider adoption. She hopes the story of their time with Paul will encourage others.

“I think it’s important to tell other people in our situation – especially people with spinal cord injuries who aren’t able to have kids – they can have this experience and be a role model to someone,” she says.

Donna Ruppert is eager to help, too.

“We would like make sure other families in that situation approach us,” she says.