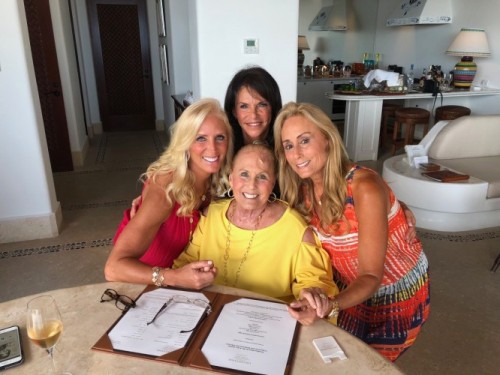 In 2016, Phyllis Sandler, 78, from Boca Raton, Florida, was playing her weekly card game with friends when she suddenly felt horrible.

She had a splitting headache. She was sweating and shaking. Her ears rang. An ambulance soon rushed her to Boca Raton Regional Hospital, where she was admitted into the ICU.

A busy, vibrant wife, mother, and grandmother and an active member of the community, Phyllis started convulsing during a CT scan. She was immediately taken into surgery for a subarachnoid hemorrhage caused by a ruptured aneurysm – a life-threatening type of stroke.

“She went from peaking in her life to being in a coma,” recalls her oldest daughter, Robin Rubin.

Phyllis remained in a coma for the next 39 days. One neurologist suggested the family call hospice. As her family discussed that option – they even discussed her funeral – another neurologist told them to take a longer view of recovery. “This isn’t a sprint, it’s a marathon,” he said.

A short time later, Phyllis opened her eyes, though she remained largely unresponsive. The family transferred her by medical plane to Shepherd Center, where she entered the Disorders of Consciousness (DOC) Program for patients who are minimally conscious. Phyllis emerged from her coma the next day and immediately began therapy.

“We were shocked,” Robin says. “They were getting her dressed, sitting her up. The vibe at Shepherd Center is completely positive. It’s, ‘What do we have to do to make this person better?’ There’s no room for negative thought. It’s, ‘Let’s go! Up and at ‘em!’”

Phyllis continued her rehabilitation in Shepherd Center’s Stroke Rehabilitation Program, steadily making progress. She discharged after three months to undergo a medical procedure back home in Boca Raton. She’s active again in the community, where she and her husband, Harvey Sandler, are generous philanthropists.

Since leaving Shepherd Center in the summer of 2016, Phyllis has accompanied three grandchildren down the aisle at their weddings, and has twice become a great-grandmother, for a total of three great-grandchildren.