Will Cotter, 19, takes on college, adaptive sports after sustaining a spinal cord injury in a diving accident. 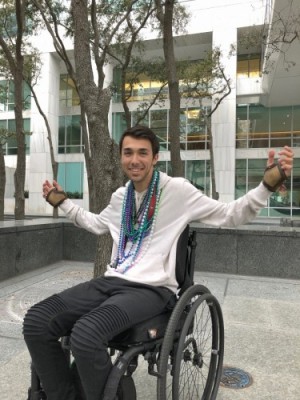 Early in high school, Will Cotter, 19, became intrigued with the idea of pursuing a medical career. A longtime soccer player, he was plagued by knee and ankle injuries. At 14, he had already undergone his first knee surgery. He started thinking about becoming an orthopedic surgeon because he knew firsthand the impact they have on young athletes.

Then, on June 24, 2018, Will sustained a C-6 to -7 spinal cord injury diving off a dock into a Florida lake. The injury changed the course of his life in many ways, but it also gave him another chance to see a new field of medicine firsthand.

Transferred from Tampa General Hospital, Will arrived at Shepherd Center with no movement below the chest or in his hands. With the support of his family and care team in the Spinal Cord Injury Rehabilitation Program, he went to work. The progress was incremental. Twitches in one finger, then another. Then came the ability to pinch, squeeze and push.

As an athlete, he was frustrated by his body’s new limitations. But his athlete’s attitude proved vital.

“You’re not given a lot of choice in this scenario,” Will says. “So I thought about what I could control. And that was my mindset and how I responded to things. I tried to be positive and celebrate every little victory. You just have to focus on the things that fuel you. Because if you sit back and sulk, you’re definitely not going to make any progress.”

Six months after his injury, he started his first year at Florida State University (FSU), where he’s studying neuroscience – a field he’s become quite familiar with since his injury. This past summer, Will returned to Atlanta for additional physical therapy in Shepherd Center’s Spinal Cord Injury Day Program.

Today, he’s back out on the water as much as possible – whitewater rafting, fishing and boating. He and his girlfriend Victoria often play tennis. And, Will’s trying to start a quad rugby team at FSU; it’s a sport 3 he fell in love with at Shepherd Center.

“It’s all about pushing the limits of my injury and fueling that competitive spirit,” he says.