After Ryan Miller, 46, attended SHARE, he learned to cope with his anger and find purpose through creativity. 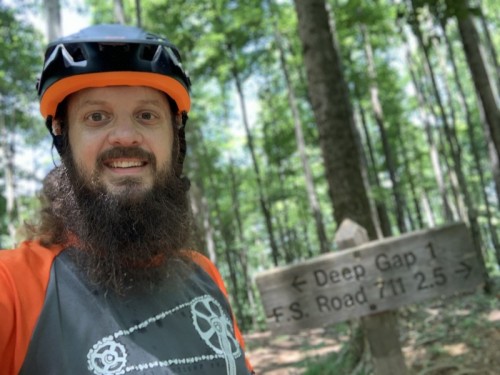 When Ryan Miller drives his truck nowadays, he marvels at what a peaceful experience it is.

That’s because up until 2021, Ryan, 46, had real anger management issues. In fact, as he would attest, he was the embodiment of road rage. When someone made him mad while driving, he would resort to chasing the offender, cutting the car off, or, at worst, running it off the road. Sometimes he would get out of his truck and confront the driver.

“I was filled with so much rage,” Ryan says.

In 2012, Ryan retired from the military, where he spent seven years in active duty as an Army combat engineer and 13 years in the Georgia National Guard. He worked for a while — first in a bike shop and then as a sales representative. He also owned a guided bicycle tour business with his wife. But eventually, the injuries he sustained while in active duty — which resulted in lower back pain and the need for a double hip replacement — made working difficult because he could not sit or stand for long periods of time.

“I didn’t know what to do or where to go,” he says. “At one point, I was living in the woods eating candy bars. I had no purpose.”

With his erratic behavior, lack of focus and increasing memory problems, Ryan’s wife insisted he get some help. After an MRI revealed a pituitary cyst, Ryan came to Shepherd Center for a second opinion, where he was referred to the hospital’s SHARE Military Initiative, a comprehensive rehabilitation program for post-9/11 veterans. The SHARE team also diagnosed him with a traumatic brain injury (TBI) and post-traumatic stress disorder (PTSD).

During his 12-week stay at SHARE, which began in May 2021, Ryan had two goals: getting his anger under control and finding purpose in life.

After working with the team at SHARE, he started to see a difference.

“Clearing my head and my body of uncontrolled emotions gave me more focus,” he says. “I was able to rebuild my relationship with my wife and look at next steps.”

Through recreation therapy, Ryan rediscovered drawing, something he hadn’t done since childhood. “It helped me connect with my creative side,” he says.

Ryan is combining that newfound creativity with another passion — biking. His wife, a project manager, is developing a 400-acre active outreach park north of Atlanta, and he is working with her to build adaptive mountain bike paths throughout the park. These paths can accommodate a broad range of riders who typically cannot ride a standard mountain bike and require adaptive equipment.

And best of all, his anger is under control.

“Driving is a completely different experience,” he says. “I am calm, and I don’t let anything bother me.”

“SHARE was pretty transformative,” he says. “And it really helped being with other veterans. It was a place where I could talk freely and feel accepted. It was a gift.”