With confidence he gained at Shepherd Center, Nick Coltman has visited 14 countries since 2000. 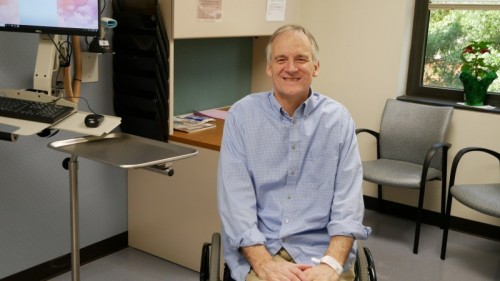 World travel is in Nick Coltman’s bones. The 55-year-old was born in England, then grew up in Australia and New Hampshire. While his family later settled in Atlanta, Nick ventured on to Alaska.

In 1992, he founded the alternative weekly newspaper Anchorage Press with his then-girlfriend and now-wife Maggie. When they weren’t working on the paper, the couple was most likely traveling abroad. Or, Nick – an avid skier, rock climber and mountaineer – was seeking adventure outdoors.

On a cold but sunny November day in 2000, Nick set out for a quick hike up Flattop Mountain, terrain just seven miles from his home. Near the summit, an avalanche wiped out the thin layer of icy snow below his feet, propelling him 600 feet down a steep, rocky gully. Rescuers airlifted him off the mountain. He was alive but hypothermic, with broken ribs, collapsed lungs and a T-8 to -9 spinal cord injury.

He arrived at Shepherd Center from Providence Alaska Hospital a few weeks later. In low spirits, Nick says he was quickly inspired by the progress he saw in others around him in the Spinal Cord Injury Rehabilitation Program.

“I’ve got this big turtle shell brace on and I don’t know how to do anything,” Nick recalls. “But you see people a few weeks down the road from you making progress. That makes a big difference. It gives you something to strive for.”

Nick embraced his recreational therapy. He swam in the pool, played wheelchair basketball, and learned how to handcycle and shoot 8-ball pool. He credits his time at Shepherd Center for his return to Alaska – where snow seven months a year makes life difficult for people who use wheelchairs.

Since selling their newspaper, Nick and Maggie have run a furniture business and a tea shop, as well as invested in commercial real estate. And they’re still traveling the world. Since 2000, Nick has visited 14 countries, several more than once. He even swam Australia’s Great Barrier Reef.

“It’s all thanks to the confidence I gained at Shepherd Center,” he says. “I realized you can still do things you love. You just learn how to do them a bit differently.”