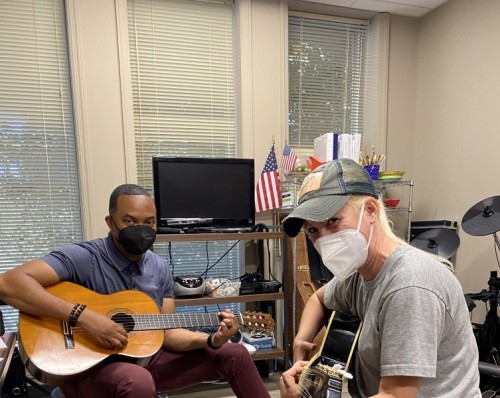 Rebecca Schlegelmilch, 40, enlisted in the Army when she was 17 years old, working in logistics for more than 21 years. She did five tours of duty — two in Iraq and three in Afghanistan.

When faced with another deployment in 2018, Rebecca, who was selected for the rank of sergeant major, chose instead to retire. However, she quickly discovered she did not feel equipped for life as a civilian. She says her mental health had been deteriorating rapidly for some time. In addition, Rebecca had sustained a traumatic brain injury (TBI) from multiple blast exposures during her years of service, along with a head injury, leading to lingering symptoms.

“Once I retired, I found it even harder to deal with and control my symptoms,” Rebecca remembers. “Fear and anxiety fueled by aggravation and anger drove me to withdraw and disengage. I had lost my identity and purpose, making life dark and painful.”

Unfamiliar with the healthcare and insurance systems outside of the Army, finding help for her physical and emotional symptoms quickly became another source of frustration.

“I was running into dead end after dead end trying to get help,” Rebecca says. “My whole mission was to fix myself, but I couldn’t do it. That only compounded the problem.”

Rebecca learned about Shepherd Center’s SHARE Military Initiative, a comprehensive rehabilitation program for post 9/11 veterans, from another veterans group. She was accepted into SHARE in January 2021. For 12 weeks, she spent one week a month at Shepherd Center and attended telehealth sessions every day during the other three weeks. She worked with a team of therapists to combat her TBI, post-traumatic stress disorder (PTSD), anxiety and depression. She also learned to play the guitar.

“One of the best parts of SHARE is that the team is heavily vested in your success,” Rebecca says. “It bolstered my self-confidence to know that they believed in me and were all working together to improve my health and wellness.”

Rebecca graduated from SHARE in April 2021 with a brand new outlook. She’s reconnecting with friends and recently took a trip to Colombia, South America, and plans on visiting Panama next. Along with continuing to play the guitar, she’d also like to learn to surf.

“SHARE changed my outlook by giving me hope and belief in the future,” Rebecca says. “It was an amazing experience. I would highly recommend this program. If you can just get there, it can change your life. The hardest part is taking that first step.”

If you or someone you love could benefit from the SHARE Military Initiative, visit shepherd.org/share.