Bill Henis found a way to accept the limitations that living with MS has caused – thanks to Shepherd Center. 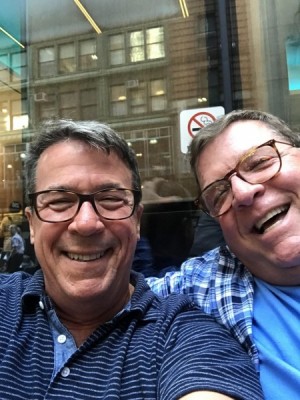 For two years, Bill Henis lived with severe pain in his legs and what he calls “brain fog.” Doctors suspected multiple sclerosis (MS) but never gave him a definitive diagnosis. His symptoms worsened. He was newly married, and he and his husband had just moved to a new house. Positive things were happening in his life, but his health challenges were causing him to be depressed.

His doctor suggested he visit the Andrew C. Carlos Multiple Sclerosis Institute at Shepherd Center. He met with Ben Thrower, M.D., medical director of the MS Institute, who confirmed the symptoms he was experiencing were from MS.

That confirmation – in 2015 – set him on a path of improvement and acceptance. Though experimentation with different medications took some time, his symptoms eventually got under control. But he believes working with therapists and participating in the Eula C. & Andrew C. Carlos Multiple Sclerosis Wellness Program made the difference.

Several years ago, he and his husband, Kevin, attended a two-week intensive day program at Shepherd Center where they learned what Bill calls “life hacks.”

“They gave me a tool to help me button my shirts more easily, and I learned about cooling vests that allowed me to be more productive,” Bill says. The program provided him with strategies to improve his cognitive issues and fine motor skills. Physical therapy and stretching exercises allowed him to work on strength and flexibility. He even got tips on meal planning and shopping. But the biggest thing to come out of that workshop was something that improved his posture.

Until that point, Bill had been using a cane to get around. While it facilitated walking, it took a toll on his posture, causing him to hunch over. It only worsened over time. A therapist solved the problem by replacing the cane with two walking sticks that enabled him to stand tall while still providing balance and stability when he walked.

“It was transformational,” Bill says. “My posture and balance improved, and I was able to walk longer distances.”

“Through counseling, Kevin and I learned that sometimes we just have to say ‘so what?’ when there are things I can’t do, or we have to change our plans,” Bill says. “That approach has really helped me improve my attitude.”

Bill and Kevin – both retired now – like to travel, and Bill has learned to take any limitations he finds in stride. He takes daily walks when he is able and spends his free time baking – a skill he picked up during the pandemic. He sees it as therapeutic.

“Holding a measuring cup and grasping measuring spoons helps me practice my fine motor skills,” says Bill, whose specialty became cakes and cinnamon rolls. “Following a recipe sharpens my cognitive skills. And baking is very satisfying and gives me a sense of accomplishment.”

After enduring two years of uncertainty, Bill says finding the MS Institute and working with the therapists there has been a true gift.

“I am amazed at how generous and committed every staff member is,” Bill says. “They are dedicated to making things easier for people with MS, and the care they show goes beyond just doing their jobs. I am so grateful for Shepherd Center.”