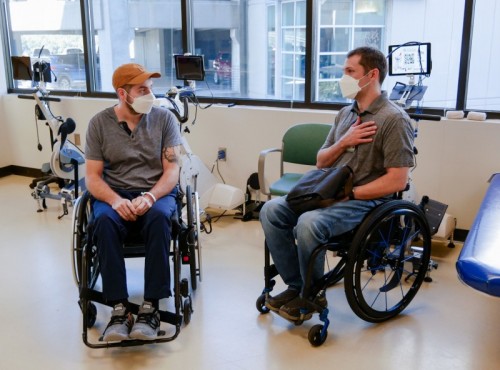 David Carter loves all things outdoorsy, from swimming to fishing to street bike racing. While he was on a weekend expedition with friends, the unimaginable happened. Although David does not remember the actual incident, he knows he was racing ahead when he lost control of his bike. Along with good samaritans, his friends helped David in the minutes after the accident. David was ultimately airlifted to Grady Memorial Hospital in Atlanta, Georgia, where he learned he had sustained a spinal cord injury with a mild traumatic brain injury (TBI).

After spending a month in the ICU at Grady, David transferred to Shepherd Center. Interestingly, when David worked for Georgia Power, his route took him by Shepherd Center for five years, and he never noticed it. As a patient at Shepherd Center, his initial therapy was a big blur for the first week or two because of his brain injury. David stayed quiet most of the time after his accident because he was still dealing with aphasia, which can make speaking a challenge. He was extremely weak during therapy and took some time to regain weight and rebuild muscle mass. David credits his care team at Shepherd for his recovery, as well as the love and compassion of his therapists and peer support liaisons, who showed him that independence was achievable.

A pivotal moment for David came when his peer support liaison, Pete, was able to do a transfer without breaking eye contact. David struggled with learning how to transfer from his wheelchair to another surface or location. Seeing someone living with a similar physical disability demonstrate this task successfully proved to him that such things were possible.

Eight years later, David received a bachelor’s degree in healthcare management and now works at Shepherd Center as a peer liaison. David helps patients with those critical transfers, in addition to making research presentations, performing community outreach, teaching self-care classes, and posting on social media. He is also an active member of Shepherd’s water ski team and has represented the United States in four world championships. David has traveled the world, and he still loves speed bikes, but he is most proud of his five-month-old son.

View more stories like this in our Community Benefits Report.