It's just been amazing to see her progress from inpatient to where we are now. She's doing amazing. She's got some ways to go, but she's headed in the right direction. And I attribute that to the team at Shepherd who prepared us and prepared me to be there for her and in the capacity that she needed. 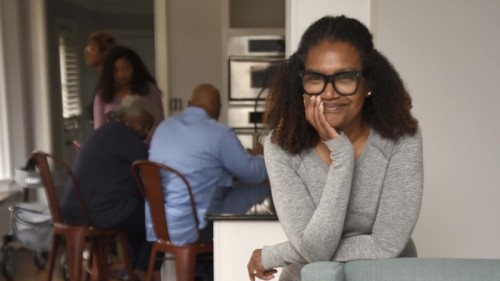 Christine Trotman learned how to choose hope during difficulties in life after her daughter was diagnosed with neuromyelitis optica.

Family members and caregivers are an important part of the rehabilitation and treatment process. Christine Trotman's daughter Eliana first began experiencing symptoms of neuromyelitis optica in December 2020. As her daughter began treatment at Shepherd Center's Andrew C. Carlos Multiple Sclerosis Institute, Christine found herself adjusting to her role as a caregiver.

Q: When you first found out about Eliana's diagnosis, what were your thoughts going into this journey?
The early days are kind of a blur. I think I was in just complete shock because Eliana was originally misdiagnosed. So we had gone through a few hospital visits and stays before we got to the point where she was properly diagnosed. I didn't quite understand what neuromyelitis optica was. I just knew that they were giving me no guarantees that she would walk again. I think my whole body was in shock. And I didn't share that with anybody, not even my husband, because saying it was too frightful. I just knew I had to do whatever I could to get my daughter through it.

Q: How did you adjust to this new part of your life once Eliana began treatment at Shepherd Center?
Shepherd Center had everything in place, everything I needed—like where I needed to get my COVID-19 test and what I should pack. I was just in a blur. I was just following their steps like a soldier. I don't know where I'm going, but I'm just going to follow their navigation and listen to her caseworker, Emily, who was on it and do everything she tells me to do. When I got there, they had psychologists and everything on staff. It's an unbelievable place. It wasn't a journey that I had even anticipated. We were on this journey that's changed our lives forever.

Q: In the year since Eliana’s diagnosis, you’ve shifted to becoming her caregiver. What has that change been like for both of you?
We're a team. And I think that is a result of this experience. I think we're becoming better people. It’s not a journey I would choose, but I could say I like myself better. You have this other world of disability and accessibility that you took for granted. You just get out of your car. You just do things. You go through a door, and you never think, “Is it accessible?” You're just able to do it. And that's a privilege that I was not aware I had, but now I notice it everywhere. We are advocates for the need of accessibility standards, and we've just become that voice for them. It’s just opening up a world to us that I feel blessed to be a part of. I go to a consignment shop and think, “How can I get my daughter in here when there are all kinds of chairs on the outside? She’d like to come and see your wonderful things in here, but she can't get in here because your chairs are in a way.” Everywhere I go, I’m looking at these things, not just for my daughter but for others as well.

Q: How is Eliana doing? How has the last year been for her?
She's a fighter, resilient, determined. She has surprised her medical team with her progress. She doesn't stop. She’s taken advantage of all the outpatient resources that Shepherd has made known to her. And she's used that to her advantage to push herself forward and progress in her therapy. She's doing extremely well. We just moved back into her home, right before Thanksgiving, after being gone for almost a year.

And it's just been amazing to see her progress from inpatient to where we are now. She's doing amazing. She's got some ways to go, but she's headed in the right direction. And I attribute that to the team at Shepherd who prepared us and prepared me to be there for her and in the capacity that she needed.

Q: What would your advice be to other families who are in similar situations to yours last year?
You have to take advantage of the tools and resources they have for you. That is your time to learn everything you need to learn. You have to be as all in as you possibly can be. You have to be as hands-on as you possibly can be because not only is it good for you, but it communicates to your loved one that you're in it with them. You can't turn away from anything. You've got to be willing to do as much as you can. That has been something that has given relief to my daughter. She knew that I was equipped to take care of her when we left there because Shepherd Center gives you so much support. They have everything there, but they appreciate a person who's willing to learn to do it all because they know when you leave, it's going to be a different story. And it gave her a sense of security when she walked out of there.

Talk to people. Talk to family and just remain as hopeful as you can be. Join support groups, too.