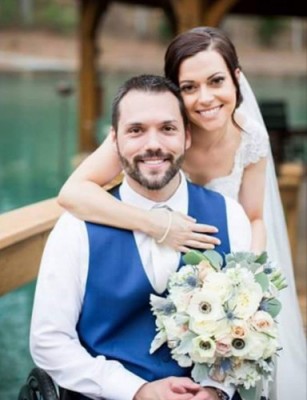 David and Brittany Carter at their wedding.

David and Brittany Carter met while volunteering at Shepherd Center’s Adventure Skills Workshop (ASW) in 2014, four years after David sustained a T-7 injury in a motorcycle crash in August 2010. At the time, Brittany was studying recreational therapy at the University of South Alabama. After hitting it off and beginning a relationship, the two continued to volunteer at ASW yearly; the third year of volunteering together, David proposed on the dock where they met. David and Brittany have been married since 2018.

Q: Brittany, what drew you to David initially?

Brittany: I really liked his zest for life. He was very optimistic. Didn't really see his disability. Just really got to know the person and that's how it all started. And we went from there. We didn't start dating until about four or five months after, but the rest has been history.

Q: David, can you describe beginning to date after injury?

David: Dating became a little bit of an issue with trying to interact with people and not see them see the chair. And that was one of the less difficult things when I met Brittany, because she kind of saw me for me, as opposed to seeing the injury and seeing all the baggage that came with the spinal cord injury. So the dating scene was a little bit difficult for me for a few years until I re-established my confidence.

Q: What are some of the hardest challenges you’ve faced in this relationship?

Brittany: It's really hard for me to articulate because when there is a challenge that kind of presents itself, we just really work around it. Of course this was a little bit later in our relationship, but finding a house was a little bit difficult just because we had to make sure that the house was one level and it was open enough to where he could move his chair. Going on vacations, making sure that there's an accessible room, making sure that the location that we go to is accessible. Dealing with people who park in handicap spots and educating people on why they do need to reserve those spots for people that do have physical disabilities.

There’s a list of challenges that we face, but we've kind of just taken each challenge one at a time, faced it head on and that's really helped us grow as a couple.

David: Our first date, we went to a restaurant. Most restaurants will have tables and booths. Well, this one only had one, maybe two tables.And they were party sized tables to be able to seat a bunch of people. Both of the tables were actually booked because they had birthday parties. So, she and I had to get into the booth. And it hasn't really been difficult for me in a long time, ever since I went through my therapy and learned how do proper transfers and make sure I've got all the right equipment to be able to do everything, but it was her first experience seeing it. And it kind of worried me that she was going to think, oh no, is this going to be every single time we go to a restaurant?

Q: Do you have any advice for anyone who may be navigating relationships with a disability?

Brittany: Have patience. That's probably my biggest piece of advice. And just, the rock for the person and, you know, likewise, I think that David and I we've built a really strong foundation because we are a really good team. We take on the world together and you know, whatever obstacle he goes through, I'm right there with him and vice versa.

David: I'd like to add that our level of communication I think it's one of the biggest things and as Brittany talked about after we met it at adventure skills workshop, we didn't go on a date until about four months afterwards, but we still talked and we built a good friendship off of communication. So whenever there are difficult obstacles that have to be worked through, we're able to talk it through, whether that be in our relationship or whether that'd be something physical as far as some kind of limitation with where we're at or what we're doing.