Adam Albaugh credits Shepherd Center for preparing him for life after brain injury. 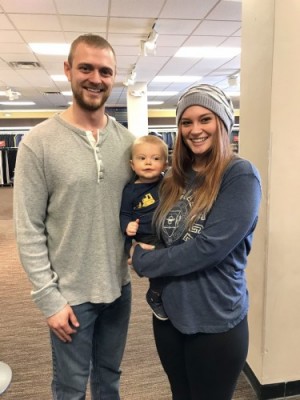 On June 26, 2017, Adam Albaugh, 25, from Warren, Pennsylvania, was near the end of a month-long work assignment in Carson City, Nevada.

A quality engineer for a defense contractor, Adam went to dinner in nearby South Lake Tahoe, California, to celebrate with co-workers. He later had drinks and got separated from the group. He called his girlfriend, whom he had started dating that month, to pick him up nearby.

But two strangers assaulted Adam before she arrived. They dragged him down a road, and believing he was dead, hid his body. The assailants were never caught.

When EMTs arrived, Adam was non-responsive and given little chance of survival. Airlifted to Renown Regional Medical Center, in Reno, Nevada, he remained in a coma for more than a week. He had sustained a severe brain injury and six skull fractures.

“They didn’t see me as just another customer, they saw me as a friend, as family,” he says. “They looked out for me.”

Then, in February 2018, less than eight months after his brutal attack, Adam returned to work. The woman he’d met in Nevada, now his fiancé, soon gave birth to their son, Ryland. They now live in a house Adam bought recently in York, Pennsylvania, where he works. Adam credits Shepherd Center for much of what he’s accomplished in so short a time.

“Shepherd Center helped prepare me for life after a brain injury, and essentially restarted my life,” he says. As for future wedding plans, while Adam and his fiancé haven’t finalized the year yet, they have picked a date – June 26. It’s the anniversary of Adam’s injury. “I want to take a tragic day and make some good out of it,” he says.