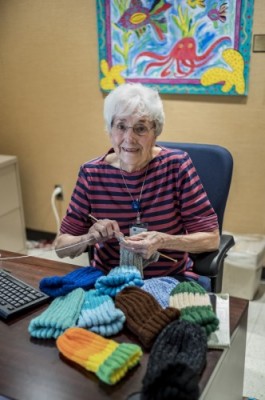 When Beryl Waters was growing up in Hayes Middlesex, England, during World War II, she spent a lot of her early years in air raid shelters.

“To keep me quiet, my two older sisters taught me to knit when I was just four years old,” she says.

As it turns out, that skill would prove valuable in putting smiles on hundreds of faces. If asked, she’ll proudly scroll through her phone to display picture after picture of Shepherd Center patients wearing hats she has knitted for them.

This started when she was spotted at the Shepherd Center Welcome Desk knitting a baby sweater. One of the Shepherd Center chaplains asked her if she could knit prayer shawls. She certainly could, she replied, as she had done it for her former church in Florida. She soon made a stack of shawls — all about five feet long each — and gave them to the chaplain. But she didn’t like the idea of not knowing who was on the receiving end of her handiwork.

“If I didn’t know who was getting them, I couldn’t pray for them,” Beryl says. “So I started delivering them myself.”

Soon, she was fulfilling requests for hats to go along with the shawls. When it became too time consuming to make the shawls, she focused on just knitting hats. In the last two years, she estimates she has probably made 400 of them.

Knitting hats is just one of the jobs she has performed since she became a Shepherd Center volunteer four years ago, logging in nearly 5,000 volunteer hours since then. She does everything from clerical tasks to tending the Anna and Hays Mershon Secret Garden to serving as a brain injury peer visitor to filling in at the Welcome Desk, as needed.

“Beryl is an amazing volunteer,” says Alaina Case, Shepherd Center’s volunteer services coordinator. “She’s such a positive person and gives so much, and she has really impacted the livesof others through her work here.”

She became a volunteer at Shepherd Center almost by accident. After moving to Atlanta in 2014 from Palm Beach, Florida, to live with her son, she wanted something to do with her time. Living just two blocks from Shepherd Center, one day she was walking by and decided to stop in and see what it was all about.

“Right away I felt this ambience of hope when I walked through the doors,” Beryl says. “I knew it was a place I wanted to be.”

Beryl, 82, is no stranger to overcoming adversity herself. After divorcing from her husband — with whom she has twin sons — Beryl returned to school, earning an undergraduate degree, as well as an MBA, at East Carolina University. She started a career as a grant writer at the university, working in the department of biology.

While at work one day in 1993, she collapsed with a ruptured brain aneurysm. She quickly underwent surgery to repair it and had another one several weeks later. Despite not having rehabilitation or any caregiving help, Beryl recovered fully and returned to work. She retired in 1994.

Because of her experience surviving two brain aneurysms, she was asked to become an ABI Peer Visitor – part of a group of people who are brain injury survivors and serve as a resource for newly brain injured patients. She now visits regularly with brain injury patients at both Shepherd Center and nearby Piedmont

Hospital, in addition to her other volunteer duties.

Beryl can be seen at Shepherd Center — somewhere — nearly every day. She gives tirelessly of her time, but does not see it as a job.

“Volunteering at Shepherd Center gives me a purpose,” Beryl says. “It is like a second home to me, and I couldn’t think of a better way to spend my time.”