I Can't to I Can: Rob Newbill
Newsroom

The Paths That Led Us Here
Making a Difference in Patients’ Lives
I Can't to I Can: Carolynn Goerke
“I Can’t” to “I Can”
In New Issue of Spinal Column, Shepherd Center Employees Reflect on the Unique Paths that Led Them to Where They are Today
From I Can't to I Can: Shawn Tyson

I Can't to I Can: Rob Newbill

After participating in Shepherd Center's SHARE Military Initiative, veteran Rob Newbill was given the tools to turn his life around. 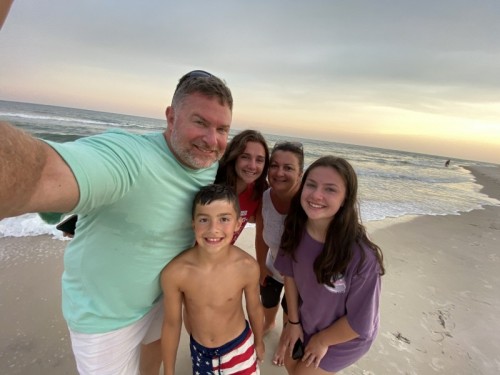 Rob Newbill spends time with his family on the beach at St. George Island, Florida.

On a summer afternoon earlier this year, Rob Newbill finished playing a couple of hours of pickleball at his local YMCA with a group of people he’d just met, and he emerged victorious. A year ago, this never would’ve happened.

“I was a recluse,” he says. “I didn’t want to interact with people or even leave the house unless I absolutely had to.”

He was struggling with depression and anxiety, and he was easily frustrated. His physical symptoms included vertigo, blurry vision, and problems with word recall. Although he knew something wasn’t quite right, he didn’t know how to solve the problem.

It wasn’t until a chance meeting with a Shepherd Center SHARE Military Initiative intake coordinator through a mutual friend that he realized that his symptoms might be related to his 20 years in the military, namely two tours in Iraq.

He came to SHARE in April 2022 and was diagnosed with cognitive, visual, and vestibular problems – a diagnosis that Rob calls “both shocking and vindicating.” He spent three months at SHARE, living in an off-site apartment and traveling home on the weekends to be with his wife and three children.

Rob, who is originally from Chico, California, enlisted in the U.S. Army in 1995 at age 18, looking for adventure and a way to see the world. He eventually attended the United States Military Academy at West Point, graduating as an infantry officer in 2002.

At SHARE, Rob was given the tools to deal with his challenges through various forms of therapy as well as counseling. He also had the opportunity to explore outside interests such as fly fishing and beekeeping.

It has made quite a difference.

“I feel better today – mentally, emotionally, physically, and spiritually – than I have in a very long time,” Rob says. “I have gone from being depressed and pessimistic, to confident, optimistic, and enthusiastic about the future. I am proud of the person I am and have developed a deep desire to help others.”

Through the help of a Shepherd Center vocational coach, Rob is looking for a job, hoping to find a veteran outreach or an Army JROTC instructor position. He credits SHARE for his turnaround.

“Everyone at SHARE is part of a team whose purpose is to improve clients’ lives,” he says. “The entire team met me with patience and encouragement and were ready to shift into higher gears when I was ready. They gave me my life back and I appreciate each of them immensely.”