William Hoyt and family have a long-standing history of giving back. 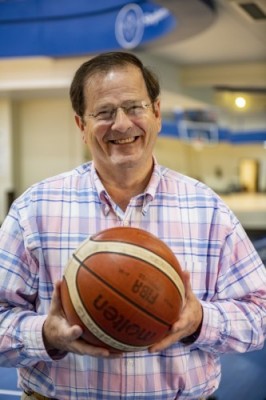 William Hoyt is a familiar face to many at Shepherd Center. Sometimes jokingly referred to as “ticket man,” he’s known for donating seats to staff , patients and their families for Atlanta Braves, Falcons and Hawks games from his own season ticket packages. The tickets offer patients and their families an opportunity for a break away from the hospital. When there aren’t patients or families available to use the tickets, they are given to Shepherd staff as a thank you for a job well done.

“He finds it easy just to walk in here among the patients and talk with people,” Alana Shepherd, Shepherd Center co-founder, says.

Behind the scenes, William is also active in recruiting others in the community to give time or donate to Shepherd Center. For Hoyt, the origins of his generosity are never far from his mind.

“I had a brother who was in a motorcycle accident when he was 15 and I was nine,” explains William, a retired SunTrust bank executive and member of Shepherd Center’s Board of Trustees. “People helped us back when we were in need. This is my chance to pay it back.”

William and his family’s connection with Shepherd Center pre-dates the hospital’s founding, in 1975.

After the motorcycle crash resulting in a brain injury for William’s brother Gus in 1964, rehabilitation included home therapy known as “patterning.” It required five adults at a time to move and flex Gus’ limbs for several minutes, four times a day. William’s mother Sara organized more than 300 volunteers for the task over the next four years.

One friend took over organizing the care for a week every year to give his mother a needed break: Shepherd Center co-founder Alana Shepherd.

“It was a labor of love,” Alana says. “Gus was a character, a funny, engaging guy.”

Hoyt says it was selfess kind gestures from friends like the Shepherds and Gus’ best friend Abner Simonton that meant so much and saw his family through a tough time. Simonton used to take Gus out all day every Thanksgiving and Chritmas for 18 years. Gus eventually walked with the aid of half-crutches. Sadly, he died at 34 from a grand mal seizure.

After William graduated from Mercer University in 1978,his first job was as an orderly at Shepherd Center, then a much smaller hospital and in a different location. He worked there for a year before pursuing his banking career.

Through the years, William and his family, including his mother and father and two aunts, have been generous donors. Plaques commemorate their gifts to fund the tunnel that con- nects Shepherd Center with Piedmont Atlanta Hospital, as well as Shepherd Center patient rooms.

William, 63, serves on a number of other nonprofit boards, including Good Samaritan Health Center, Global Health Action and Friends of Refugees. He has visited Haiti almost a dozen times to provide needed services.

William sees his work at Shepherd Center and in the Atlanta community at large as a way to take the kindness people showed his family and pay it forward.

“If I did one nice thing each and every day for someone else for the rest of my life, that would be a good start towards doing that,” he says.