At Shepherd, assistive technologies are integrated into rehabilitation plans on day one.

Elizabeth Zweigel and her daughter
Elizabeth Zweigel, 38, a quadruple amputee, says that assistive technologies have given her confidence and peace of mind.
Ryan Carter and his mom
For Ryan Carter, 27, of Senoia, Georgia, eye gaze technology that interfaces with his computer has given him a voice and an easier way to communicate. 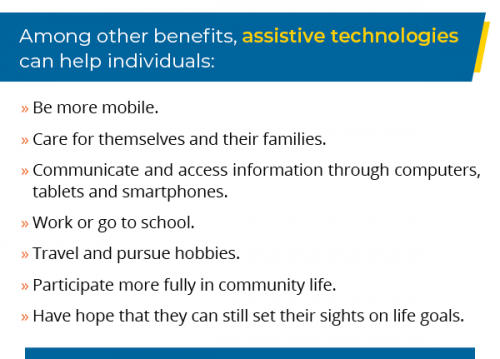 When we see a tennis ball, most of us likely think of hitting it over a net with a racquet. But that same tennis ball can be fitted to the bottom of a walker for traction and stability. Poke a spoon or a pen through it, and it makes eating or writing much easier for people with weakened grip strength. In this context, a tennis ball is among the simplest examples of assistive technologies, which are invaluable to people living with disabilities.

Assistive technologies, by definition, include any item, device or piece of equipment, off the shelf, modified or customized, that can be used to maintain or improve function to help a person learn, work or play in the community of their choice. August 19, 2021, marks the 33rd anniversary of the Assistive Technology (AT) Act, key legislation that provides people with disabilities access to a wide array of tools to help them more fully participate and thrive across different settings and activities. The AT Act intentionally set forth a broad definition of assistive technology to include anything that might give more independence.

At Shepherd Center, assistive technologies are an integral part of rehabilitation plans from the moment patients arrive, across the continuum of their care and as they return to the community.

“These technologies make a world of difference in the life of an individual,” says Danny Housley, case manager in Shepherd Center’s Assistive Technology Center, who, as a blind person, has been using assistive technologies since he could walk. “At Shepherd, we get to know each patient, their circumstances and condition, and work together to find solutions that meet their specific needs. Ultimately, they decide which technology is most helpful as they are the ones who will use it.”

For Ryan Carter, 27, of Senoia, Georgia, eye gaze technology that interfaces with his computer has given him a voice and an easier way to communicate. Ryan, who was born with cerebral palsy, tried many communication solutions before coming to Shepherd Center, including alphabet boards to point to letters to spell out words. He says his device, which allows him to control his computer with his eye movements and verbalize his thoughts through speech-generated software, has changed his whole world. It even allows him to control the TV and other things in his environment.

“The word that comes to mind is freedom. I feel free not having to rely on my family and friends to hold an alphabetical board in front of me and do word prediction to figure out what I was saying,” Ryan says. “I’m a very outgoing person. It’s given me the ability to say what I want when I want, and that’s just awesome. I can call and text just like everyone else.”

He adds that Shepherd Center has a special place in his heart, crediting his speech pathologist for helping him choose the right device and the right access method – even adjusting the device so that it sits lower and to the right to accommodate his movements.

For his mom, Jo Carter, it’s more than she could have hoped for.

“He just didn’t say very much – not that he didn’t have thoughts or feelings or desires, but it was just too much, and it was exhausting. Now he’s able to share what he needs and, although we knew it all along, it turns out he’s pretty funny too!” Jo shares with a smile. “With this technology and his power wheelchair, he has independence, and I have independence, which is a beautiful thing. It’s what every parent wants for their kids, to be able to do things for themselves and spread their wings as much as possible.”

Elizabeth Zweigel, 38, a quadruple amputee, says that assistive technologies have given her confidence and peace of mind. Elizabeth was diagnosed with sepsis in 2016, several months after having her second child. She was put into a two-week coma and had her limbs amputated to save her life.

“I feel like Northside Hospital saved my life, and Shepherd gave me life,” Elizabeth says. “I was super independent before this happened, so any level of independence that I could gain back [during my recovery] was huge.”

The team at Shepherd Center listened to her needs and taught her how to use her smartphone again, control her TV and tablet using different apps, and get back to driving. More recently, she worked with the Wheelchair Seating Clinic to find a portable electronic wheelchair that folds down and isn’t as bulky so she can take it to the zoo with her kids or on vacations, including a recent girls’ trip to St. Thomas.

“It’s given me a lot of freedom. I used to have to crawl around the hotel floor if I didn’t have a van big enough to bring my big, power wheelchair,” she says. “Anything I can do for myself makes me feel better. Just knowing that these assistive technologies are available, even if you’re not going to use them now, is empowering.”