As a rehabilitation engineer in Shepherd Center's Assistive Technology Center, Jared Grier lends his engineering expertise to improve the lives of patients. 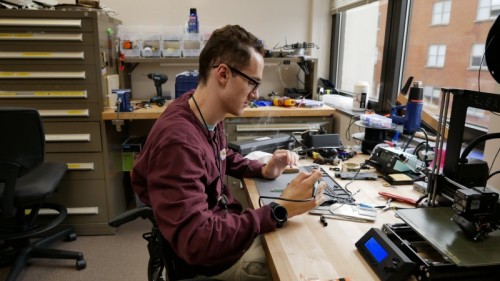 Jared was enjoying his freshman year in college – pledging, immersing himself in new classes and activities while learning how to live on his own. His ultimate goal was to graduate with a degree in engineering. Jared loved being outdoors – roaming and exploring, fishing, and climbing trees. One day, Jared and a group of friends were climbing trees on campus when the unexpected happened – Jared fell and sustained a spinal cord injury (SCI). Friends rushed to help him. Jared was taken to UMass Memorial Health, where he spent three weeks.

Jared arrived at Shepherd Center the weekend of Memorial Day and spent a few days in the ICU getting his blood pressure stabilized. While at Shepherd, he was offered the opportunity to participate in a research study while still completing daily therapy. Because of his age, he was part of the Adolescent Spinal Cord Injury Rehabilitation Program. One of the goals of this program is to give young people with SCI the self-assurance to enjoy social outings and be prepared if something unexpected happens. Jared remembers going on an outing to the Chick-fil-A headquarters. It was rough, having just had surgery, but he did it. He continued therapy for the next three months, making it his goal to get in a manual wheelchair and ultimately fully regain his independence.

Jared’s final outing was to the airport to prepare for flying, which gave him the confidence to make his journey home. Before leaving the hospital, he received his chair and graduated feeling ready to live his new life.

After returning home, Jared went back to school to complete his degree. He graduated and began working in computer-based engineering for an aerospace company. While he enjoyed the work, Jared felt somewhat unfulfilled.

"Getting ready for work takes a lot of energy, so I wanted to be sure that what I decided to do was equally fulfilling," Jared explains.

Fortunately, a position opened up in Shepherd’s Assistive Technology Center, which Jared applied for and got. He moved from Massachusetts to Atlanta, and now, he provides assistance using technology, like 3D printing, to Shepherd’s patients and their family members. Often, a therapist will see a challenge, and Jared will create the solution, such as custom modifications for wheelchair users or custom orders for adaptive driving.

For more stories about former patients or family members of patients who have decided to give back to Shepherd Center as employees or volunteers, read our Community Benefit Report.