Adding a Splash of Color – and a Message of Hope – to the Walls of Shepherd Center
Winners Announced for 2022's Shepherd Center Wheelchair Division of The Atlanta Journal-Constitution Peachtree Road Race
Veteran Learns Self Acceptance and Gives Back to Others
New Issue of Spinal Column Features Patients Who Found Art and Art Therapy Key to Their Rehabilitation
The Art of Healing: Theresa Reer's Story
The Art of Healing: Bradford Ladd's Story

CLEVELAND, Ohio – Parker Hannifin Corporation announced today that the team behind its Indego® exoskeleton device has won a 2013 POPULAR MECHANICS Breakthrough Innovator Award, which recognizes innovators whose work will make the world smarter, safer and more efficient. The device is being tested with patients at Shepherd Center.

Indego is a personal mobility system that is controlled with postural changes as gyroscopes and accelerometers sense the user’s balance. This “wearable robot” serves as a mechanical brace for the lower limbs, providing torque, or rotating power, to the hips and knees for walking. A proprietary control interface allows for smooth operation that works in harmony with natural human movement and body position. At just 27 pounds, it is half the weight of other exoskeletons, and has a slim profile and modular design that can be quickly assembled and disassembled for ease of use and transportation.

“I am incredibly proud to lead the Indego project, and congratulate the entire team on this exciting win,” said Achilleas Dorotheou, Vice President and Head, Human Motion & Control Business Unit for Parker Hannifin. “I thank Vanderbilt University, Shepherd Center and our clinical trial patients for their partnership, and look forward to exploring where the technology can take us in the future.”

The ninth annual POPULAR MECHANICS Breakthrough Awards distinguish winners in fields such as technology, medicine, space exploration and automotive design. Innovators are honored for their inventions that improve the world in new ways, and products are awarded for leading their industries in design and engineering.

“Parker Hannifin is committed to developing products and technologies that solve some of the world’s most pressing challenges, transforming the way we work, live and prosper globally,” said Craig Maxwell, Vice President and Chief Technology & Innovation Officer for Parker Hannifin. “Indego is an example of that, providing people with spinal cord injuries, stroke, and multiple sclerosis a new level of independence.”

The honorees will be recognized in the November issue of POPULAR MECHANICS, available on newsstands on Oct. 15, and also celebrated at a day-long conference and gala awards ceremony at Hearst Tower in New York City on Oct. 22.

To learn more about Indego, visit www.indego.com. Also, read about the testing of the device at Shepherd Center at www.shepherdcentermagazine.org/fall-2013/powered-exoskeleton-to-assist-walking/. 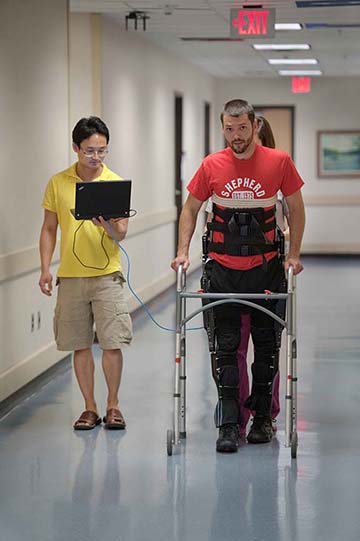