Anything But Idle
Newsroom

The Paths That Led Us Here
Making a Difference in Patients’ Lives
I Can't to I Can: Rob Newbill
I Can't to I Can: Carolynn Goerke
“I Can’t” to “I Can”
In New Issue of Spinal Column, Shepherd Center Employees Reflect on the Unique Paths that Led Them to Where They are Today

With help from Shepherd Center, Tommy Knight navigates multiple sclerosis to return to his love of working with his hands. 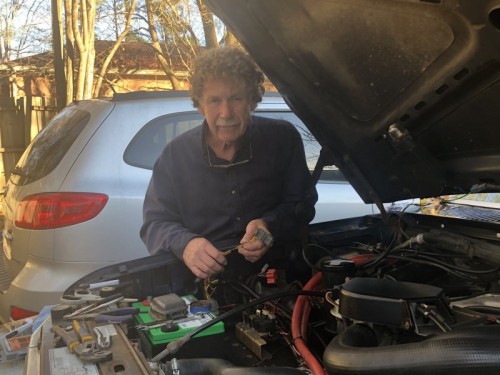 Tommy Knight, 67, loves to restore cars in his spare time.

Tommy Knight, 67, grew up around his father’s lumber company in Macon, Georgia, and something about the work captured his imagination. Through the years, even as he worked as a claims adjustor by day, Tommy taught himself carpentry, plumbing and electrical work. He’s restored cars and vintage train sets, repaired houses and rigged lighting for a community theater.

In short, Tommy’s hands are rarely idle. That’s why he was devastated by a sudden deterioration in his hands — and his legs and feet — early in 2020 due to multiple sclerosis, a condition he’s navigated since the 1990s.

“With that and COVID-19 hitting around the same time, I was at a real low point,” Tommy says. “I’m driven to be independent. I want to be productive and useful.”

Thankfully, Tommy has been a patient at Shepherd Center since 2013. His care team listened to his issues and recommended a new medication regimen. Just as crucially, they crafted a physical and occupational therapy plan at the Eula C. and Andrew C. Carlos Multiple Sclerosis Rehabilitation and Wellness Program at Shepherd Center.

“I’ve never seen a program quite so comprehensive,” Tommy says. “They really get to the heart of what you need to feel like yourself. It’s phenomenal. It’s literally turned my life around.”

“They know how to target what’s going to help you most,” Tommy says. “And it’s always an interactive thing. We work together to come up with solutions. I scored a win getting to work with those two.”

When he began therapy in September 2020, Tommy was using a cane, even for short distances at home. Now, he’s going on short walks and getting upstairs in his house again. Best of all, the tinkerer credits his therapists with restoring his hands to near-full function. Now, the man who has rebuilt a 1970 Pontiac GTO and a 1966 Ford Mustang is back in the garage, doing a mechanical and electrical restoration of a friend’s truck.

Tommy’s also spending more quality time with his wife Kitty — an educator and professional singer who used to perform under Tommy’s lighting at Macon Little Theatre — and their two grown daughters.

“It’s been a busy life, and that’s how I like it,” Tommy says. “I’m thankful I’m not through living it just yet!”